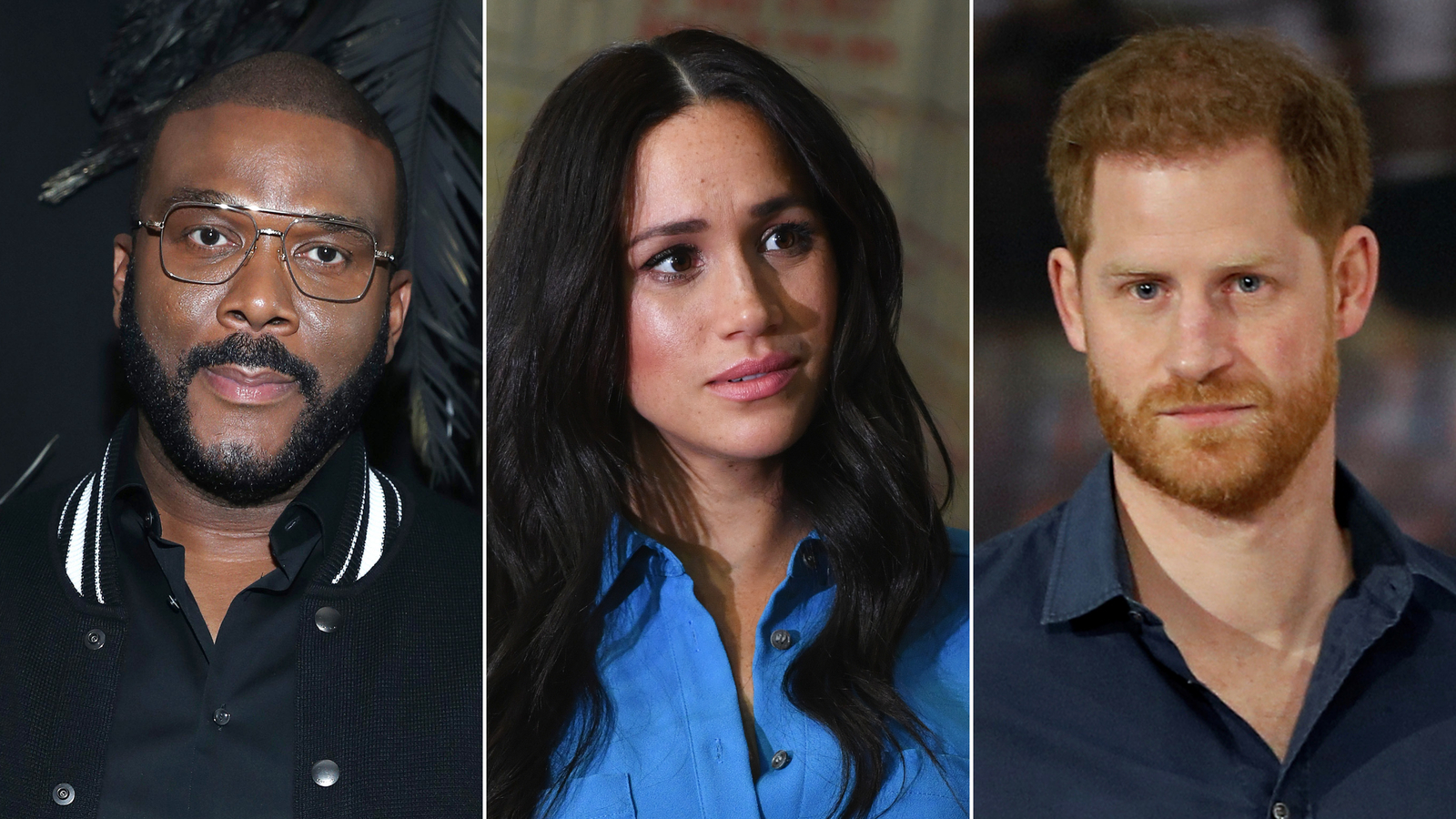 In an interview filled with one bombshell after another, Meghan Markle and Prince Harry revealed their fears and struggles with racism in the royal family. But one unlikely hero emerged in the saga: Tyler Perry.

Perry has built an entertainment empire as a writer, actor, producer and director.

But one of his biggest legacies involves swooping in to help the wealthy and those in need — from paying for Christmas layaways to providing a private jet for Whitney Houston’s funeral.

During the CBS interview that aired Sunday night, the Duke and Duchess of Sussex detailed their relocation to Canada and later to California where they now live — and the role Perry played in their move.

Soon after the couple announced they were stepping back from their royal duties last year, they told Oprah Winfrey, they lost security protection from the British royal family. They were in Canada’s Vancouver Island at the time, and started panicking about security threats after their home’s location was revealed.

As the coronavirus pandemic intensified, they knew they had to move fast before the borders shut down.

“It dawned on me … we’re going to have our security removed, who knows how long lockdown is going to be. The world knows where we are; it’s not safe… We probably need to get out of here,” Harry said.

Perry offered his house in Southern California, where the couple stayed for several months with full security.

“We didn’t have a plan,” Markle told Oprah. “We needed a house and he (Tyler Perry) offered his security as well so it gave us breathing room to try to figure out what we were going to do.”

He went from being broke to a billionaire

About two decades ago, Perry was a high school dropout living in his car while working on his first play. He grew up in New Orleans, where he was physically and sexually abused, an experience that enraged and confused him, he told Winfrey a few years ago.

His efforts to stage a play failed several times, leaving him broke and homeless. But he never gave up.

Now the man once known for his role as an outspoken, gun-toting grandmother in movie adaptations of his popular “Madea” runs his Atlanta-based production company, Tyler Perry Studios. The studio built on 330 acres on a former Confederate Army base is the first studio fully owned by an African American in the US.

And he went from “poor as hell” to a billionaire.

He’s built up a reputation with his generosity

Through it all, Perry has built a reputation as someone who rushes to the rescue of strangers and celebrities alike.

Two years ago, he paid for layaway items worth over $430,000 at Atlanta area Walmart stores during Christmas.

“I know it’s a hard time, a lot of people are struggling and I’m just really grateful to be able to be in a position to do this,” Perry said in a video at the time.

Over the past decade, he has spread kindness in Atlanta and beyond.

After the 2012 death of Whitney Houston, he provided the plane to transport her body from Los Angeles to her home state of New Jersey for the burial.

And he’s not wavered in his support of others.

In 2019, he helped a series of people — from an American couple stuck at a Mexican hospital after they were unable to pay their bill after treatment — to a Georgia family struggling to pay rent, debt and school fees after their mother’s murder.

Audrey Turner, whose mother was killed by her boyfriend, recounted the initial conversation this way:

Last year, Time Magazine named Perry one of its 100 most influential people and Forbes added him to its list of billionaires.

He also played a key role during the pandemic

One of Perry’s most important roles recently was reassuring Black people to take the coronavirus shot.

With the pandemic killing Black people at higher rates, he hosted a show in which he interviewed experts and asked questions on the vaccine’s safety, testing and development. During the show, which aired on BET in January, he rolled up his shirt and got his shot.

He also provided groceries for thousands of elderly people in Louisiana and Georgia at the height of the pandemic in April. “I wanted to do something immediate that got out to people immediately,” he said at the time.

Macaulay Culkin and Brenda Song have welcomed a new baby, a rep for Culkin confirmed to CNN. The couple welcomed a son named Dakota Song Culkin, after the actor’s late sister, Dakota, who died in 2008 at age 29. The baby was born on April 5 in Los Angeles. “We’re overjoyed,” Culkin and Song said…… END_OF_DOCUMENT_TOKEN_TO_BE_REPLACED

It looks like “MacGyver” will not be returning for a sixth season — and some viewers are not happy about that. A petition has been launched in an attempt to get the series (which is either a reboot or a spinoff of the 1980s original based on who you ask) renewed by CBS. “MacGyver is…… END_OF_DOCUMENT_TOKEN_TO_BE_REPLACED

“American Idol” judge Luke Bryan is sitting out the first live show after testing positive for Covid-19, the singer announced on Monday. “I’m sad to say I won’t be a part of tonight’s first live @AmericanIdol show,” Bryan wrote on social media. “I tested positive for COVID but I’m doing well and look forward to…… END_OF_DOCUMENT_TOKEN_TO_BE_REPLACED

Georgia has lost a major production because of its newly restrictive voting legislation. It was announced Monday that director/producer Antoine Fuqua and his Fuqua Films and actor/producer Will Smith and his media company Westbrook Inc. have opted to move production of their forthcoming film “Emancipation” from the state. “At this moment in time, the Nation…… END_OF_DOCUMENT_TOKEN_TO_BE_REPLACED

It’s happening! Bad Bunny has announced he’s heading out on a North American tour, calling it El Último Tour del Mundo 2022. It’s the same name as his 2020 album. Tickets go on sale Friday and the tour dates run from February through April of next year. The Grammy Award winner announced the tour on…… END_OF_DOCUMENT_TOKEN_TO_BE_REPLACED

No spoilers here, but people were sad about Sunday’s “Shameless” series finale. And it wasn’t just because of what happened on the final episode of the hit Showtime series about a dysfunctional family headed by single dad Frank Gallagher (played by William H. Macy) or that the show was wrapping up after 11 seasons. What…… END_OF_DOCUMENT_TOKEN_TO_BE_REPLACED

“WTF with Marc Maron” will receive the first-ever Governors Award at the inaugural Awards for Excellence in Audio (The Ambies) on May 16. The Podcast Academy said that its Board of Governors will give Maron the award, which “recognizes a podcast or individual for the compelling impact they’ve had on the industry.” Maron and his…… END_OF_DOCUMENT_TOKEN_TO_BE_REPLACED

Hugh Jackman and his wife Deborra-Lee Furness are celebrating 25 years of marriage. Jackman took to Instagram on Sunday to post a tribute to Furness, writing, “Being married to you Deb is as natural as breathing.” He continued: “From nearly the moment we met … I knew our destiny was to be together. In our…… END_OF_DOCUMENT_TOKEN_TO_BE_REPLACED

If there’s one thing Chet Hanks has mastered, it’s the art of causing a stir. Weeks after courting controversy with his new “White Boy Summer” clothing brand, the son of Hollywood actor Tom Hanks has teased the first look at his accompanying raunchy new music video. On Sunday, the 30-year-old treated his 483,000 Instagram followers…… END_OF_DOCUMENT_TOKEN_TO_BE_REPLACED