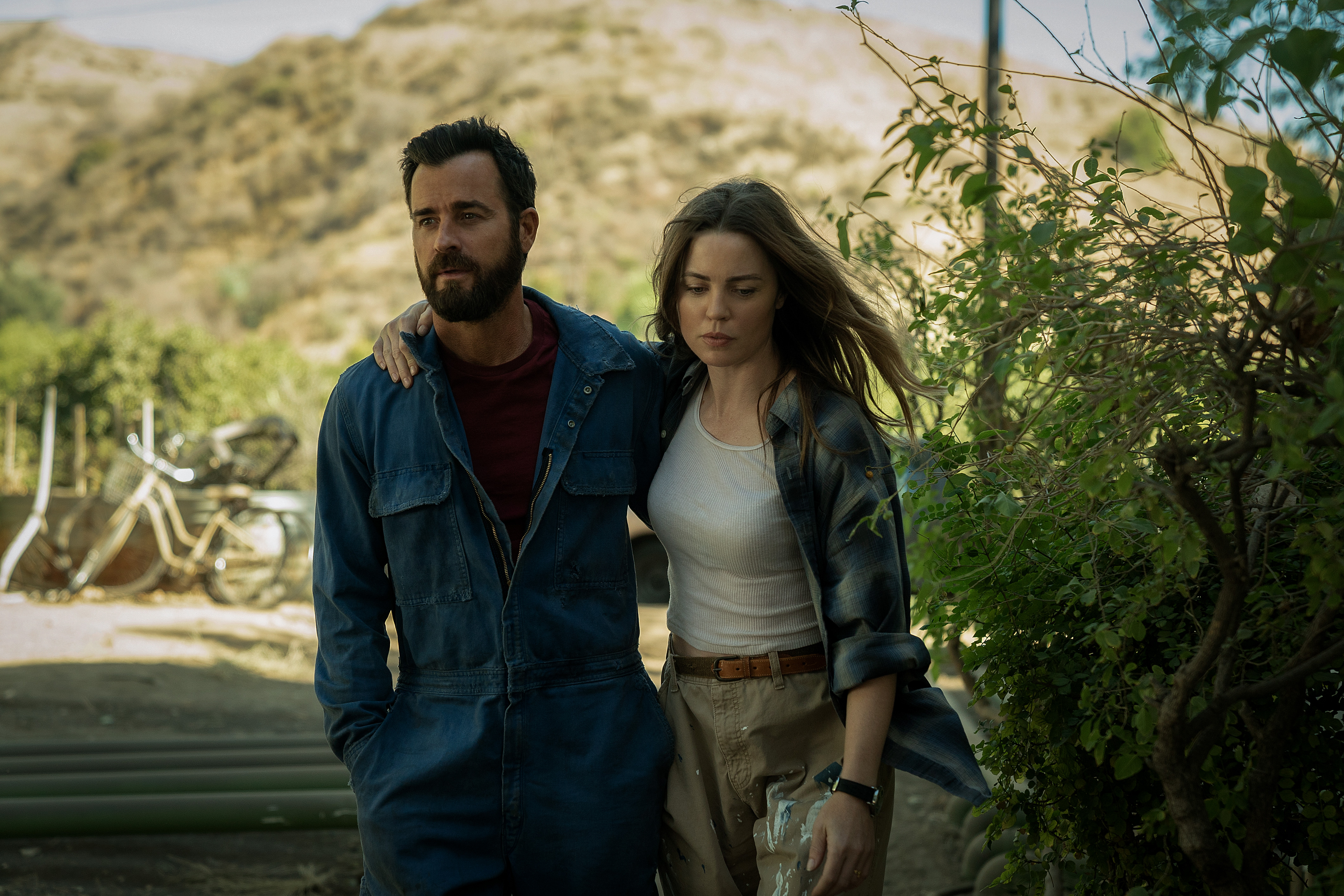 “The Mosquito Coast” comes together as the product of several puzzling choices, beginning with the decision to again adapt Paul Theroux’s 1981 book, and then to situate it in a contemporary setting. The result is a creepier-than-perhaps-even-intended limited series, which most charitably plays a poor man’s “Breaking Bad: Family Edition.”

The primary connection of note here is the involvement of actor-producer Justin Theroux (“The Leftovers”), who is Paul Theroux’s nephew, and assumes the central role of Allie Fox, the “radical idealist” who chooses to live off the grid with his wife and kids. Yet writer-producer Neil Cross (“Luther”) has embellished that with even more troubling traits, as the family winds up fleeing to Mexico, engaging in a series of dangerous encounters and questionable choices that periodically make them look like stupid Americans as well as ugly ones.

The main problem, and it’s a big one, is that there’s really nobody here to like or root for. Certainly not Theroux’s Fox, who drags his teenage kids (Logan Polish, Gabriel Batemen) into perilous situations, or his wife Margot (Melissa George), who, for all her pained expressions, is more than a little complicit in the ordeal.

Nor are the kids themselves terribly sympathetic, though the cruelty of their plight feels magnified by the 21st-century setting, depriving them of items like cellphones, and making Allie’s control over them feel more unhinged in a doomsday prepper kind of way. When the federal agent (Kimberly Elise) tracking them asks the daughter, “Why is he making you live the way you do?,” it’s a question that hangs unhelpfully over the whole exercise.

Cross basically joins the story in progress, with the Foxes on the run from the feds, giving the story a more espionage-type feel, as the family must drop everything and begin its pilgrimage through the desert.

The 1986 movie starred Harrison Ford as the wild-eyed inventor, and despite his defense of the film, represented one of his few conspicuous box-office duds during those years. While the seven-episode streaming format provides the opportunity to flesh out the story and characters, the net effect of all the cloak-and-dagger shenanigans doesn’t, as Allie and his clan careen from run-ins with US militia members to Mexican drug cartels, usually jumping out of the desert frying pan directly into the fire.

Theroux and George do bring considerable intensity to their roles, but several of the supporting characters have an almost cartoonish quality. Other than a well-deserved lecture to Allie about American imperialism and his myopic self-absorption, Cross presents this eccentric figure without shedding much light on what he’s rebelling against or the roots of his cause.

Frankly, there might never have been a right time for something like “The Mosquito Coast,” but amid the current crush of conspiracy theories, this conspicuously feels like the wrong one. The bottom line is Apple has produced a series that not only fails to get under your skin, but mostly just makes you want to swat it away.

The MTV Movie & TV Awards, a popular vote and popcorn trophy celebration of the best entertainment of the year, will take place Sunday.

The Elizabeth Olsen-led Disney+ series “Wandavision” leads with five nominations. Other top nominees are “Emily in Paris” and “The Boys,” with four nominations each, and “Bridgerton” with three nods.

On Monday, MTV will debut its inaugural UNSCRIPTED portion of the award ceremony, to celebrate reality TV shows and moments.

Sacha Baron Cohen will be honored with the “Comedic Genius Award” and Scarlett Johansson will receive the “Generation Award.”

Extreme Championship Wrestling (ECW) pro wrestler Jerome “New Jack” Young has died at 58, his wife, Jennifer Young, confirmed on Facebook. The wrestler joined ECW in the mid-90s and was featured in the 1999 documentary “Beyond the Mat,” according to the entertainment data website IMDB. The wrestling website PWInsider.com, who spoke to the wrestler’s wife,…… END_OF_DOCUMENT_TOKEN_TO_BE_REPLACED

According to “The Resident” showrunner and executive producer Andrew Chapman, there was a time when the medical drama took some heat from those in the field. “We were really the first show to show problems in medicine and to really attack them and we took a lot of flack from doctors all across the country…… END_OF_DOCUMENT_TOKEN_TO_BE_REPLACED

Robert De Niro injured his leg on location, but the show will go on. A rep for the legendary actor provided a statement to CNN about the incident on Friday. “While at his on-location home in Oklahoma for the filming of Martin Scorsese’s “Killers of the Flower Moon,” Robert De Niro injured his quadriceps muscle…… END_OF_DOCUMENT_TOKEN_TO_BE_REPLACED

R & B singer Tank is speaking out about losing his hearing, in an effort to help others who may face similar problems. The 45-year-old crooner and actor best known for tunes like “Maybe I Deserve” and “When We” took to his verified Instagram account to post a video about what he’s been going through,…… END_OF_DOCUMENT_TOKEN_TO_BE_REPLACED

“Pride” offers an off-the-beaten-track history of LGBTQ experiences and activism in the US from the 1950s to the present, with different filmmakers undertaking each decade/episode. Even diced up that way it’s a lot to cover, most effective when it comes to highlighting key individuals and moments than connecting those dots. Indeed, the format of this…… END_OF_DOCUMENT_TOKEN_TO_BE_REPLACED

Following his dramatic TV turn in “Fargo,” Chris Rock expands his portfolio again with “Spiral: From the Book of Saw,” an extension on the eight-movie-old “Saw” franchise. But this attempt to stitch together the horror staple and a “Seven”-like detective thriller flatly misfires, yielding a not-sequel that finally feels like putting lipstick on a pig…… END_OF_DOCUMENT_TOKEN_TO_BE_REPLACED

“The Woman in the Window” dispenses with an on-screen nod to Alfred Hitchcock’s “Rear Window” early, explained by its protagonist’s love of old movies. Yet sitting through this baffling, long-on-the-shelf thriller starring Amy Adams, the clips mostly serve as a subtle cue you’d be better off watching those films instead of this poor reason to…… END_OF_DOCUMENT_TOKEN_TO_BE_REPLACED

“Halston” follows the familiar rise-and-fall structure of cinematic biographies — think “Citizen Kane,” only with more sex, better clothes and disco. Yet what really defines this style-over-substance miniseries, other than Ewan McGregor’s no-holds-barred performance, are its insights regarding the tension between art and commerce. Spanning three decades in the designer’s tempestuous life, “Halston” has to…… END_OF_DOCUMENT_TOKEN_TO_BE_REPLACED

Broadway stars will be popping up around New York City this summer. Stars from Broadway shows have teamed up with iconic New York eatery Tavern on the Green for “Broadway at Tavern,” a special series of live concerts under the stars at the restaurant. The exclusive TodayTix Originals concert series kicks off on May 25…… END_OF_DOCUMENT_TOKEN_TO_BE_REPLACED